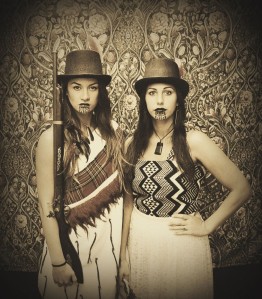 Producer Lara Northcroft, of Velvet Stone Media Ltd, says the show gives a good, rounded look into the lives of different people and showcases the stories that we don’t often hear about.

“Everybody has an amazing dad or an amazing aunty that has a story to tell… and we really want to acknowledge the talent in our communities.

“As Māori we look at success differently, it’s not just about how much you earn, it is about how we look after ourselves, our whānau, hapū and iwi.”

In the series we meet Mihikore Owen, wfaho after a successful 16 years as a police officer decided to upskill herself and with another two years of training she finally became a fully-fledged detective.

Her story doesn’t end there however, and after breaking her neck and being recently diagnosed and treated for cancer Mihi now has a new take on the important things in life.

In the first episode of TE ITI KAHURANGI – THE JOURNEY TO SUCCESS on February 24 at 8.00pm we visit Ria Hall, who has been making waves on the mainstream music scene since her performance at the opening of the 2011 Rugby World Cup.

Since then, the singer/songwriter has been riding the wave of success going on to win both a Māori Music Award and a NZ Music Award.

The first episode of the show will also feature make-up designer Phoenix Renata of Phoenix Cosmetics and portrait photographers Taaniko Nordstrom and Vienna Nordstrom of Soldiers Rd Portraits, who launched their vintage-style portraits at the Kawhia KaiFest in early 2013, and had no idea they had hit upon a winning business idea.

Tune in to TE ITI KAHURANGI on Mondays at 8.00pm from February 24 for positive success stories that extend beyond financial wealth and societal expectations.